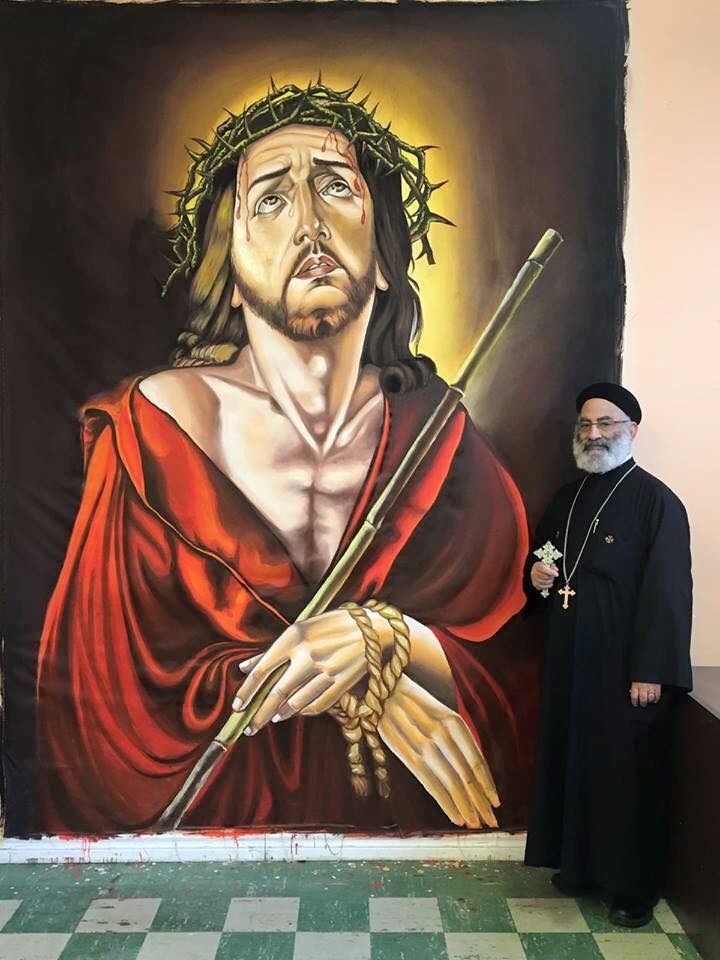 Father Antonios next to his painting of Jesus

+The price that was: When God created Adam from dust, He ” breathed into his nostrils the breath of life; and man became a living being” ( Genesis 2:7). They were man and woman in God’s image and likeness, according to His love and good will” Then God said, “Let Us make man in Our image, according to Our likeness” ( Genesis 1:26). Here, we are unable to assess man’s worthiness that had exceeded all the creatures that preceded him, even the Angels did not have God’s image and likeness, the Book Says about them” Who makes His angels spirits And His ministers a flame of fire….. Are they not all ministering spirits sent forth to minister for those who will inherit salvation? ( Hebrews 1:7,14). Therefore, it’s not surprising that God gives man dominion over all creatures around him” Let Us make man in Our image, according to Our likeness; let them have dominion over the fish of the sea, over the birds of the air, and over the cattle, over all the earth and over every creeping thing that creeps on the earth” (Genesis 1:26). The intellectual and spiritual communication between God and man was in a state of untainted harmony” Out of the ground the Lord God formed every beast of the field and every bird of the air, and brought them to Adam to see what he would call them. And whatever Adam called each living creature, that was its name. So Adam gave names to all cattle, to the birds of the air, and to every beast of the field. But for Adam there was not found a helper comparable to him” ( Genesis 2:19-20). This reveals very little of what glory man had before the fall. He had a value that can not be comprehended neither by the heavenly nor earthly calculations…. But…
+We became worthless: When man sinned and fell, he paid the wage of sin which is death” For the wages of sin is death, but the gift of God is eternal life in Christ Jesus our Lord” ( Romans 6:23). And all became under death” Therefore, just as through one man sin entered the world, and death through sin, and thus death spread to all men, because all sinned” ( Romans 5:12). And by this, death became the price of our sin, including all who are on earth. All the prophets, apostles and saints before Christ had not found one man who has a better price than death” There is none righteous, no, not one; There is none who understands; There is none who seeks after God. They have all turned aside; They have together become unprofitable; There is none who does good, no, not one” ( Romans 3:10-12). The Lord says about man before The Savior’s coming in Zechariah” For before these days There were no wages for man nor any hire for beast; There was no peace from the enemy for whoever went out or came in; For I set all men, everyone, against his neighbor” ( Zechariah 8:10). Certainly, the best way to describe death is worthlessness. This was the miserable man after his fall, worthless, for death worked inside of him until it subdued him under dust from which he has been created. This included everyone even the rich and powerful. Therefore The a Book warns us not to depend on money and rich people, nor on those who think that they have power” Do not put your trust in princes, Nor in a son of man, in whom there is no help. His spirit departs, he returns to his earth; In that very day his plans perish” ( Psalm 146:3-4).

+We were bought for a price: God, full of endless love and uncountable eternal mercy, prepared for our salvation. And the price was fulsome. For” God so loved the world that He gave His only begotten Son, that whoever believes in Him should not perish but have everlasting life” ( John 3:16). The Son has taken our humanity and body, resembling us in everything except for sin, through Whom we acquired glory” And all Mine are Yours, and Yours are Mine, and I am glorified in them….. And the glory which You gave Me I have given them, that they may be one just as We are one” ( John 17:10,17). In order for The Lord to convey to us His glory, it was necessary for Him to pay the price for our salvation from the captivity of death which was the wage of sin….. Let us see the cost that God had to pay through His Beloved Son. Saint Paul says” who, being in the form of God, did not consider it robbery to be equal with God, but made Himself of no reputation, taking the form of a bondservant, and coming in the likeness of men. And being found in appearance as a man, He humbled Himself and became obedient to the point of death, even the death of the cross. Therefore God also has highly exalted Him and given Him the name which is above every name” ( Philippians 2:6-9). And about what The Lord has done to His Son for us he says” Christ has redeemed us from the curse of the law, having become a curse for us (for it is written, “Cursed is everyone who hangs on a tree)” ( Galatians 3:13). The Prophet Isaiah has excelled in spirit, singing the song of love by which God had loved us, offering His only Son to buy us from the death of sin and slavery to the freedom of the glory of the children of God. I invite you my beloved, to read Isaiah chapter 53.

+What’s on us?! : If this is what Christ paid to save us from eternal loss; an extremely expensive cost, by which we became The children of God, inheriting with Christ all heavenly glory. For Christ has paid the full price for our sins through all generations by dying on the cross wearing our earthly body, yet He was with no sin. Therefore, he rose from the dead, making us sacred and justified in front of God” For the love of Christ compels us, because we judge thus: that if One died for all, then all died; and He died for all, that those who live should live no longer for themselves, but for Him who died for them and rose again. Therefore, from now on, we regard no one according to the flesh. Even though we have known Christ according to the flesh, yet now we know Him thus no longer. Therefore, if anyone is in Christ, he is a new creation; old things have passed away; behold, all things have become new. Now all things are of God, who has reconciled us to Himself through Jesus Christ, and has given us the ministry of reconciliation” ( 2Corinthians 5:14-18). Therefore, now that we have accepted what Christ has done for us, through our faith, baptism, and communion, we do not have any other way but to become for The Lord through work and truth” Let your light so shine before men, that they may see your good works and glorify your Father in heaven” (Matthew 5:16). ” For you were bought at a price; therefore glorify God in your body and in your spirit, which are God’s” ( 1 Corinthians 6:20).