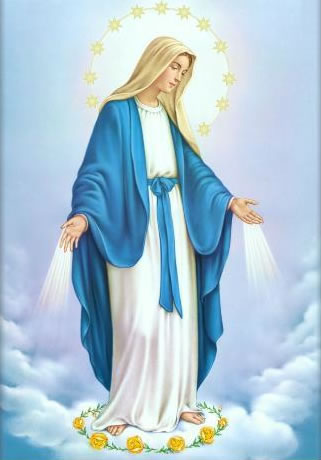 The Book says that first “Adam named his wife Eve, because she would become the mother of all the living” (Genesis 3:20).

Becoming the mother of all human beings that live on the face of the earth after her. But Adam and Eve fell and left paradise, by their choice, becoming in death and disobeying the commandment of the Lord, thus we became because of Eve out of the scope of eternal life with God, making Eve no longer the mother of all living but of all dead.

But through the incarnation of the Eternal Word from the virgin and the Holy Spirit in her womb, the New Adam was born of the Holy Spirit and the Virgin Mary, not of man but born of the Father before all ages, was born of the Virgin after the sanctification of her womb by the Holy Spirit for Him to be born there in, a new creation, us becoming by affiliation the children of the Virgin, the new Eve and brothers to her Firstborn; Christ. For Jesus Christ is called the Son of God because He is equal in essence to the Father, Light of Light, saying plainly “Anyone who has seen me has seen the Father” ( John 14:9 ). Christ is also called the Son of Man, because He united with our Humanity, spiritually and physically, and this humanity which He took from the body of the Virgin, not by human reproduction, but by the Holy Spirit. Therefore, when the angel Gabriel says to the Virgin Mary” So the holy one to be born will be called the Son of God” (Luke 1:35), we have in this a share, that we through the birth of the Lord taking our humanity, we are newly born in Him. Then, whoever accepts and believes in Christ and is baptized in His name for the Father by the Holy Spirit, becomes a child of God. “Yet to all who did receive him, to those who believed in his name, he gave the right to become children of God”. (John3:12).

Hence, and according to the interpretation of the Fathers, when the Lord Jesus said on the cross to His mother “ Woman, behold your son”, He has decided then that she is the new Eve, the mother of every living man in Him, and that John, whom Jesus loved, represented all mankind who the Father loved and proclaimed this love through the incarnation of His Son, His death on the Cross and through the coming of the Holy Spirit on all who accept, believe and get baptized to be saved. “For God so loved the world that he gave his one and only Son, that whoever believes in him shall not perish but have eternal life” (John 3:16).

O, pure Virgin, I have become – in John the beloved– your son, and that is what Jesus said on the Cross, it is not strange then that I call you, O Virgin, my mother. We have become heavenly lawful children. It is not strange then, that we ask for your intercession and prayers for us in front of your beloved Son Jesus Christ. For you are close to Him and honored. Didn’t God order us to “Honor your father and your mother” (Deuteronomy 5:16). Therefore, we also rejoice and honor you in our prayers and praises, for He has heard your intercession at the wedding of Cana of Galilee and made an exception for His time had not yet come. He who behind His blood, tears and excruciating pain on the Cross and before His last breath, trusted John to take care of you.

Here is your mother:

Come all ye sons and daughters, who have been deprived of a physical mother in this world, or did not experience the tenderness of motherhood, come and accept – in Christ – His mother, Saint Mary. Come and taste her true motherhood. Let us all draw upon the love of the Virgin and her affection towards us, because in all of us she sees her Son, Jesus Christ. Didn’t the Apostle Paul say ”I have been crucified with Christ and I no longer live, but Christ lives in me. The life I now live in the body, I live by faith in the Son of God, who loved me and gave himself for me” (Galatians 2:20). Just as the Father Who looks at us through Christ as His sons, so our Virgin mother looks at us in Her Son Jesus Christ as her sons.

The door is wide open for us to find this fatherly love of the Father, and the motherly love of our mother, the Virgin Mary, and just as the Lord has commanded us when we pray to call God our Father, also through Christ we are able to call His mother, the Virgin Mary, our mother. The Virgin lived in the land of misery and tasted with her Son all our sufferings as human beings in the world. She was torn while seeing her Son suffering pain on the Cross and tasting the bitterness of death in front of her eyes. And she also saw the power of His resurrection from the dead and His overpowering of death. She also rejoiced in His victory over death and sin and saw His ascension to sit at the right hand of the Father. Now, as the King’s mother, She sits on the right hand of Her Son in glory.” Daughters of kings are among your honored women; at your right hand is the royal bride in gold of Ophir” (Psalms 45:9). For she knows how much her beloved Son has of unlimited Divine possibilities and power, and she knows how much He suffered for us and how He conquered and triumphed for us, therefore do not hesitate to ask her to intercede and pray on our behalf.

O beloved of the Lord, let us enjoy her intercession and prayers on our behalf in our needs and our hardships. Just as she helped those who were in trouble at the wedding of Cana of Galilee and her Son Jesus Christ complied with her request, despite of the difficulty of what she had asked of Him, because His hour had not yet come, yet she is His mother and also ours. What a pleasure for us to enjoy her motherhood, and how lucky are we to know that the Lord listens to her prayers and intercessions on behalf of our weaknesses and needs. What a wonderful thing it is that we hear the Lord saying to His blessed Virgin Mary, to every one of us, Behold your mother.