Calling the captives to freedom 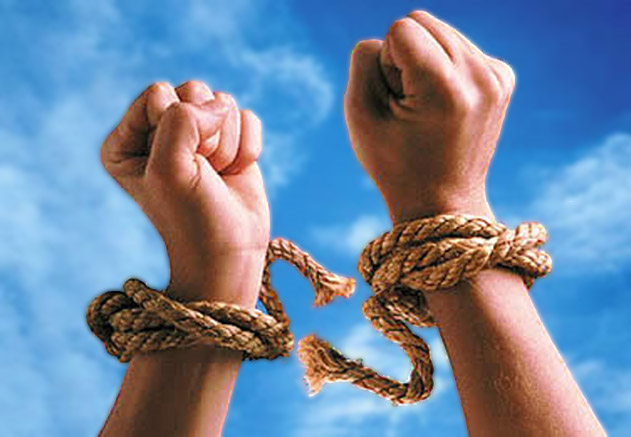 When we know who is calling, our response correlates to his person and place. He who calls is the King of Kings and Lord of Lords, who created everything seen and unseen” For of Him and through Him and to Him are all things, to whom be glory forever. Amen.” ( Romans 11:36), he who called Himself in the book of Revelation ” “I am the Alpha and the Omega, the Beginning and the End,” says the Lord,“who is and who was and who is to come, the Almighty.” ( Revelation 1:8) This is the calling God, full of pure love for us the human race. And marvel my beloved for He loves us not because we are holy and without blemish, but loved us freely “I will heal their backsliding, I will love them freely, For My anger has turned away from him. ( Hosea 14:4) , If this was mentioned in the Old Testament, excessively has it been expressed in the New Testament, in the person of our Lord Jesus Christ having all the glory – God came in the flesh ” But God demonstrates His own love toward us, in that while we were still sinners, Christ died for us.” ( Romans 5:8) Beloved, how great is the love and honor of whom is calling us? Us the dust and none. Think how God called Abraham the father of fathers for a friend’s company to a friend during their journey together? Before the wrath of God on Sodom and Gomorrah. Listen to what the Scriptures say ” And the Lord said, “Shall I hide from Abraham what I am doing, since Abraham shall surely become a great and mighty nation, and all the nations of the earth shall be blessed in him? ( Genesis 18:17,18) , and after Abraham’s debate with God to save Lot we hear Abraham saying “Indeed now, I who am but dust and ashes have taken it upon myself to speak to the Lord….Then he said, “Let not the Lord be angry, and I will speak but once more ” (Genesis 18:27,32) Therefore “Today, if you will hear His voice, Do not harden your hearts.” ( Hebrews 4:7) How wondrous it is for this Great Calling God to call us the non-existent and disdainful. I hear him Calling us to his glory and riches saying “Ho! Everyone who thirsts, Come to the waters; And you who have no money, Come, buy and eat. Yes, come, buy wine and milk Without money and without price. ( Isaiah 55:1) also the call of the Lord Jesus to all who are suffering and tired at the level of the body, soul and spirit, a call that makes the heart rejoices. Never have we heard such calling over the entire history of humanity” Come to Me, all you who labor and are heavy laden, and I will give you rest. ( Matthew 11:28) . Dear blessed, if your back is bent under your pains and worries as a result of your sins and guilt, listen to his sweet call ” Cast your burden on the Lord, And He shall sustain you.” ( psalm 55:22) .

+ The captives Satan, the devil, the enemy of goodness, the old serpent, the ruler of this world is the one who holds us captives in this world ” We know that we are of God, and the whole world lies under the sway ( 1 John 5:19) Satan trades in our world. Saint John reveals his trade and goods ” For all that is in the world—the lust of the flesh, the lust of the eyes, and the pride of life—is not of the Father but is of the world. ( 1 John 2:16) . And those are his captivity tools. The question for us, are we in captivity for the lust of the flesh, in the impurity and immorality of all kinds, whether through intellect or through our senses or heart ?! And the manifestations of captivity are repeated falling into sins of impurity even if we didn’t want, because of our foolishness we have let ourselves addicting impurity, and thus being captives to Satan. Here we strongly need to repent, screaming to the Lord to save us from the Devil’s capture and to become God’s captives, not as slaves, but to the glorious freedom of the children of God. The lust of flesh may manifest in the lust of eating and drinking. The Book referred to people held captives to the lust of eating and drinking ” For many walk, of whom I have told you often, and now tell you even weeping, that they are the enemies of the cross of Christ: whose end is destruction, whose god is their belly, and whose glory is in their shame—who set their mind on earthly things. ( Philippians 3:18,19). Here, the Church offers fasts throughout the year to suppress the body as the apostle Paul said ” But I discipline my body and bring it into subjection, lest, when I have preached to others, I myself should become disqualified.( 1 Corinthians 9:27) .

The lust of the eyes , says the Book ” All the rivers run into the sea, Yet the sea is not full; To the place from which the rivers come, There they return again. All things are full of labor; Man cannot express it. The eye is not satisfied with seeing, Nor the ear filled with hearing.( Ecclesiastes 1:7,8) . The eye had been one method used falsely by Eve leading to her fall in sin ” So when the woman saw that the tree was good for food, that it was pleasant to the eyes, and a tree desirable to make one wise, she took of its fruit and ate. She also gave to her husband with her, and he ate. Then the eyes of both of them were opened, and they knew that they were naked ( Genesis 3:6,7) The lust of the eye made David fall , and brought him the Sins of adultery and murder , despite his repentance , he had suffered a lot in his life due to his sin ” Then it happened one evening that David arose from his bed and walked on the roof of the king’s house. And from the roof he saw a woman bathing, and the woman was very beautiful to behold. So David sent and inquired about the woman. And someone said, “Is this not Bathsheba, the daughter of Eliam, the wife of Uriah the Hittite?” Then David sent messengers, and took her; and she came to him, and he lay with her, for she was cleansed from her impurity; and she returned to her house ( 2 Samuel 11:2,4) . For that reason God warns us against the lust of the eye , for it eases the path for Satan . ” But I say to you that whoever looks at a woman to lust for her has already committed adultery with her in his heart. ( Matthew 5:28) let’s pray to the Lord to circumcise our eyes with the knife Of grace so that we may be holy by him and in him. Now when we talk about boasting and pride of life, it’s enough to say that the glory is only to our great God for he is above all ” do not marvel at the matter; for high official watches over high official, and higher officials are over them. ( Eccelisiates 5:8). Boasting is from the world not God , and the world will go away and perish. Do not be deceived by money for example ” For the love of money is a root of all kinds of evil, for which some have strayed from the faith in their greediness, and pierced themselves through with many sorrows. ( 1 Timothy 6:10) . Saint Paul advised Timothy saying ” Command those who are rich in this present age not to be haughty, nor to trust in uncertain riches but in the living God, who gives us richly all things to enjoy. ( 1 Timothy 6:17). Glory to God , for he is the source of glory, be humble, being great in God whom his name was called upon us ” But “he who glories, let him glory in the Lord.” ( 2 Corinthians 10:17) The practical way to humility is to always thank God for what we have ” in everything give thanks; for this is the will of God in Christ Jesus for you.” ( 1 Thessalonians 5:18). Put in front of your eyes Nebuchudnezzar , God struck him for his pride , making him behave like a beast for seven years until he repented and humbled himself. Read about this in Daniel 4. The greatness is in God being with us , as he was with Joseph, so Joseph was a successful man. Great was Joseph in Potiphar’s house, although he was a slave, great was Joseph in prison. Then he was great before pharaoh becoming the second man on all the land of Egypt ” Pharaoh also said to Joseph, “I am Pharaoh, and without your consent no man may lift his hand or foot in all the land of Egypt.” ( Genesis 41:44) My beloved , next time God willing we will be on a journey with our loving, strong, humble God to see how he freed us, freeing us and will free us.