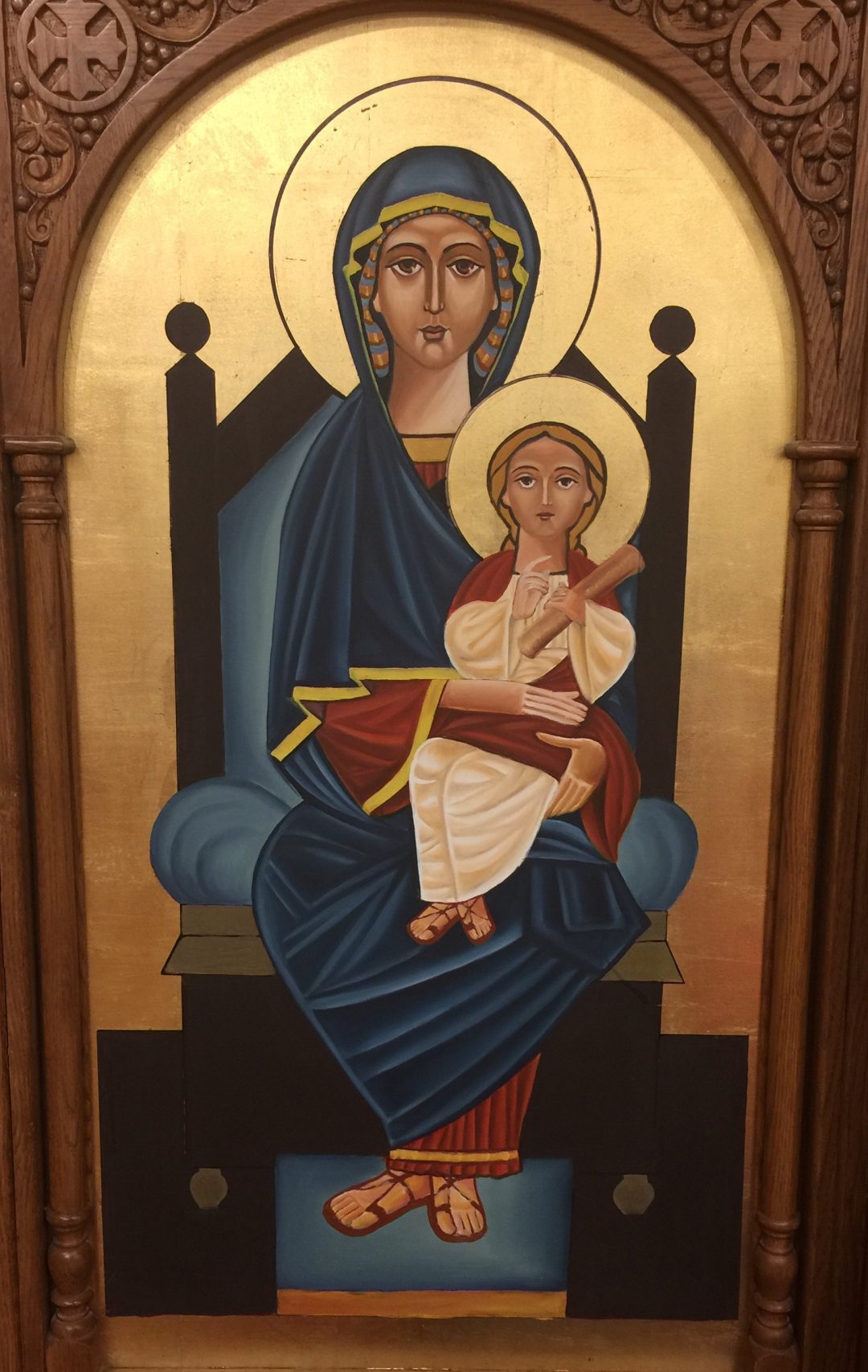 Icon of St. Mary in the altar of St. George and St. Mercurius church in St. Catharines, Ontario. Painted by the pastor of the church Fr. Antonios Zikry

+ The virgin who gave birth! It is the prophecy of Isaiah about the miracle that God has given to the whole world” Therefore the Lord Himself will give you a sign: Behold, the virgin shall conceive and bear a Son, and shall call His name Immanuel” ( Isaiah 7:14). And according to tradition we know that Simeon who was one of the seventy people who translated the Old Testament from Hebrew to Greek in the days of Ptolemy, offering the world what is known now as the translation of the Septuagint, from Which our Coptic Orthodox Church takes all the liturgical readings and depend on as a main source and reference with respect to the Old Testament, when Simeon got confused with that prophecy of Isaiah, he thought to himself how could a virgin become pregnant and give birth?!, he wanted to find another word that would be acceptable to the human mind, for example to write a lady or a girl, but inspired by the Holy Spirit he was told to write ” Virgin”, and the Holy Spirit told him that he would not see death until he lives this verse, living more than two hundred years until the prophecy was fulfilled, and this explains what we read in the gospel according to saint Luke when Simeon carried Jesus as a baby on his hands and blessed God saying” “Lord, now You are letting Your servant depart in peace, According to Your word; For my eyes have seen Your salvationWhich You have prepared before the face of all peoples” ( Luke 2:29-31).

+ The Lord had introduced this miracle through signs, events and different people to prepare the human mind for His great divine works. We find in the Old Testament Sarah, and how she was barren and did not give birth until the age of ninety, then God gave her Isaac, who refers to Christ born to a Virgin, and as Isaac means laughter and happiness, so did Jesus through Whom is joy, gladness and happiness to all people” Glory to God in the highest and on earth peace, goodwill toward men” ( Luke 2:29-31).

+ And as Rebekah Isaac’s wife was also barren” Now Isaac pleaded with the Lord for his wife, because she was barren; and the Lord granted his plea, and Rebekah his wife conceived” (Genesis 25:21). She gave birth to Jacob and Esau, and despite the fact that Jacob was the younger; he took the birthright from Esau who did not care, symbolizing the Lord Christ our savior who was born in Bethlehem, Who was called the Nazarene, referring to Nazareth, from which nothing good was expected, yet He became a savior to us all and the f irst born of all humanity through His resurrection from the dead. And Rachel Jacob’s wife was also Barren, but the Lord was glorified and she gave birth to Joseph, whose life resembles Christ in many aspects, it is sufficient to know that pharaoh called him ” Zaphnath-Paaneah” ( Genesis 41:45), which means the” earth feeder”, and Christ came offering His body on the cross, and shed His blood, a life-giving bread and drink to all those who partake of Him. We also see Hannah, Samuel’s mother, when she was barren and prayed and offered her son to serve the Lord, and the Lord listened to her prayers and gave her Samuel, that means God has listened . And Hannah praised God by the Spirit with a prayer that closely resembles Virgin Mary’s” “My heart rejoices in the Lord; My horn is exalted in the Lord. I smile at my enemies, Because I rejoice in Your salvation. “No one is holy like the Lord, For there is none besides You, Nor is there any rock like our God. “Talk no more so very proudly; Let no arrogance come from your mouth, For the Lord is the God of knowledge; And by Him actions are weighed. “The bows of the mighty men are broken, And those who stumbled are girded with strength. Those who were full have hired themselves out for bread, And the hungry have ceased to hunger. Even the barren has borne seven, And she who has many children has become feeble. “The Lord kills and makes alive; He brings down to the grave and brings up. The Lord makes poor and makes rich; He brings low and lifts up. He raises the poor from the dust And lifts the beggar from the ash heap, To set them among princes And make them inherit the throne of glory. “For the pillars of the earth are the Lord’s, And He has set the world upon them. He will guard the feet of His saints, But the wicked shall be silent in darkness. “For by strength no man shall prevail. The adversaries of the Lord shall be broken in pieces; From heaven He will thunder against them. The Lord will judge the ends of the earth. “He will give strength to His king, And exalt the horn of His anointed” ( 1 Samuel 2:1-10). And as Samuel was born to Hannah the barren, so did the Word of God from the Virgin Mary giving us life and salvation from our enemies and those who reign over us, teaching us to always pray for His kingdom to come. David saw by the Spirit the Virgin Mary who gave birth to the Savior, so he rejoiced saying” Who is like the Lord our God, Who dwells on high, Who humbles Himself to behold The things that are in the heavens and in the earth? He raises the poor out of the dust, And lifts the needy out of the ash heap, That He may seat him with princes— With the princes of His people. He grants the barren woman a home, Like a joyful mother of children. Praise the Lord!( Psalm 113:5-9). Finally, the angel Gabriel who appeared to Elizabeth who conceived in her old age, bringing to her the good news. She gave birth to John the baptist who is the greatest among all born, who came to prepare the way before the Lord and savior Jesus Christ.

+ Out of the strong came something sweet: That was the riddle of Samson to the philistines, but it refers to the meaning of the miracle that God has given us, when the Son was incarnate and born from the virgin who was not married. The name Mary also carries the meaning of bitterness, from which God has extracted the sweetest fruit of the whole creation, Jesus Christ the Redeemer. Moses with the people of Israel in the wilderness, God gave us through them an excellent example that refers to the Virgin Mary, who unexpectedly and non reasonably gave birth to the Water of Life, when the people were thirsty at Rephidim and did not find water, Moses cried out to the Lord, and the Lord said to him “Take the rod; you and your brother Aaron gather the congregation together. Speak to the rock before their eyes, and it will yield its water; thus you shall bring water for them out of the rock, and give drink to the congregation and their animals.” So Moses took the rod from before the Lord as He commanded him. And Moses and Aaron gathered the assembly together before the rock; and he said to them, “Hear now, you rebels! Must we bring water for you out of this rock?” Then Moses lifted his hand and struck the rock twice with his rod; and water came out abundantly, and the congregation and their animals drank” ( Numbers 20:7-11). And Moses called it the water of Meribah because they doubted the word of God and did not believe that water can come out of a solid rock, but whatever is not possible for men Is possible for God, and so in the fullness of time, the Virgin gave birth to the rock, the Water of Life Christ our God. As well as Aaron’s stick, when Moses placed it on the rod of the tribes of Israel in front of the tabernacle, it bloomed and became fruitful, referring to Saint Mary the Virgin who gave birth to the Fruit of Life, giving us the Savior who became the head of the church, making the Virgin a mother to all new humanity in Christ, fulfilling the prophecy of the psalm that talks About the barren who became a joyful mother of children.

+ Our mother the blessed Virgin, in you I find hope for my dry soul which cannot -without God- bear fruit for eternal life, I just ask you to remember me before the throne of grace, so that the Lord may forgive us our sins, leading me to the happy eternity so we can rejoice with You, praising and glorifying Him with all the heavenly saints Amen.